I was born in Brittany (France) and grew up in a small fishing village called Doëlan; the landscape of which has inspired numerous artists and writers such as Benoît Groult.

I lived with seven brothers and sisters in a house called “Ty Forn” (house of the oven). In the past, people from the surrounding areas used to come and bake bread in this place. 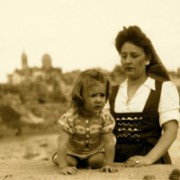 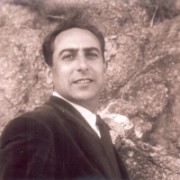 My mother taught at the little school in the village and my father was a sculptor and a painter, well known locally for his religious statues. He also taught art at the secondary school of Quimperlé. Many of his sculptures still decorate the churches, chapels of Brittany and of many cities in other parts of France.

feel a lot of admiration for my father when I think of how he struggled with the hard stone. As if enchanted, from the granite block appeared the face of a Madonna or Don Quixote’s horse. I could spend hours watching him in the forge: fascinated by his gestures, handling the chisel red from the fire. He looked like a dragon.

he house was always full of people; we lived in “chaotic harmony”, with the frequent visits from artists, poets and singers from all walks of life.

My father used to work in his studio for hours, and nobody was allowed to disturb him. To get the house quiet, my mother took all the children with her on hikes in the countryside. During these walks, she taught us the Latin names of plants and flowers. At the end of the day, she put all the names together, like a chaplet and made a song out of it, to help us remember.

When my father finished a painting, the whole family gathered in his studio. Everybody was asked to criticise his new work of art. During these privileged moments I learned about the material, volume, mass and movement …
“Colours are words”, he said, “and each colour has its own expression, diffuses its own light, its own emotion, but also its opposite”.

As a child I used to look at my fathers’ big art books, and full of wonder I discovered the paintings of Courbet, Pissaro, Cézanne, Delacroix, Picasso … .

When I was about 6 years old, I remember my father asking his children to make a drawing for him. Inspired by my drawing he made a painting in relief.
Every summer my father used to have an exhibition in Pont-Aven(the famous city of the school of Pont-Aven of which Paul Gauguin was one of the many celebrities).
When I saw the painting of my drawing in Pont-Aven, with clearly my name underneath, I felt very proud.
I realise that on this particular day my father opened the doors of his world to me.
“One day”, I thought, “I will put the colours together to tell my own story”.

From my parents I inherited the interest in nature, drawing from it my energy, my equilibrium as well as intense emotions.
I believe people do not just inherit their genes but, also their family’s spirit and energy from generation to generation.

During my childhood in Brittany, one particular visiting artist got my full attention. His name was Max Bueno de Mesquita. He was born in Amsterdam to a Jewish family of Portuguese origin.
At the age of sixteen his father took him to the Rijksmuseum (Amsterdam) to see a portrait of one of his ancestors painted by Rembrandt. At that very moment Max decided to become a painter.
During the Second World War, the majority of his family died. He himself survived Auschwitz. Every summer he visited our family to work together with my father.
He had several nervous breakdowns, but in my memory I see him as a clown playing with his long hair lock twisting it around his bald skull…
He died in 2001. The impact of these precious memories took me, quite naturally, to the Netherlands.

I was eighteen years old when I left France for the North.
In Holland, I chose my own colours to tell my own stories: Sufficiently far from my father,
” the dragon”, so as not to get burned, but also close enough to feel his warm breath.
I discovered the magnificent and powerful beauty of the skies of the country of Rembrandt and van Gogh, and, henceforth, have carried this other culture inside of me.

Today, I have created my own garden, in an old farm in the centre of the medieval city of Doesburg. My garden and the apple trees are a source of inspiration for my paintings.
From contemplative moments of intense concentration arise:

My thoughts fly together with the dragonfly…
My thoughts wind the stem of the bindweed screwing itself around the plant…
My thoughts are like pearls in a humid cobweb, early in the morning…
Full of this beauty, I pick up the baton to let the flowerbeds sing:

The delphiniums are pointing their blue stems to the sky like the organ in the church and the little yellow poppy, in its solitude, disturbs like the sharp sound of the trumpet. The white Camille, binds the colours and imposes the silence between the notes…

My travels to all end of the world also feed my inspiration. New experiences help me to shape my art.
in China I discover the Asian culture which keeps its secret behind the Chinese faces.
Coming back to my studio, I paint my divinities with a Chinese face. The Madonnas and Geishas in my paintings always carry the same message:
In this world of technology and economic interest, people want to get more and more in a materialist sense. We want to have everything in a short time, no matter whether our planet suffers from this pressure.
People are forgetting this bond we have with nature, and we are not in the position to forget that because we are nature. Nature is like a tattoo on our skin; it’s indelible and cannot be removed, erased or washed out. It’s part of us.

I remember the tattoo on the skin of a Maori in New Zeeland.
The drawings seemed to be inspired on a trunk of a tree fern.
It was as if the tattoo was saying: “The fern, the tree, the nature is me, I am nature”.
The Maori man was carrying the message the ancients already knew.
On his skin he engraved the signs of collective memory.
This I want to explore.